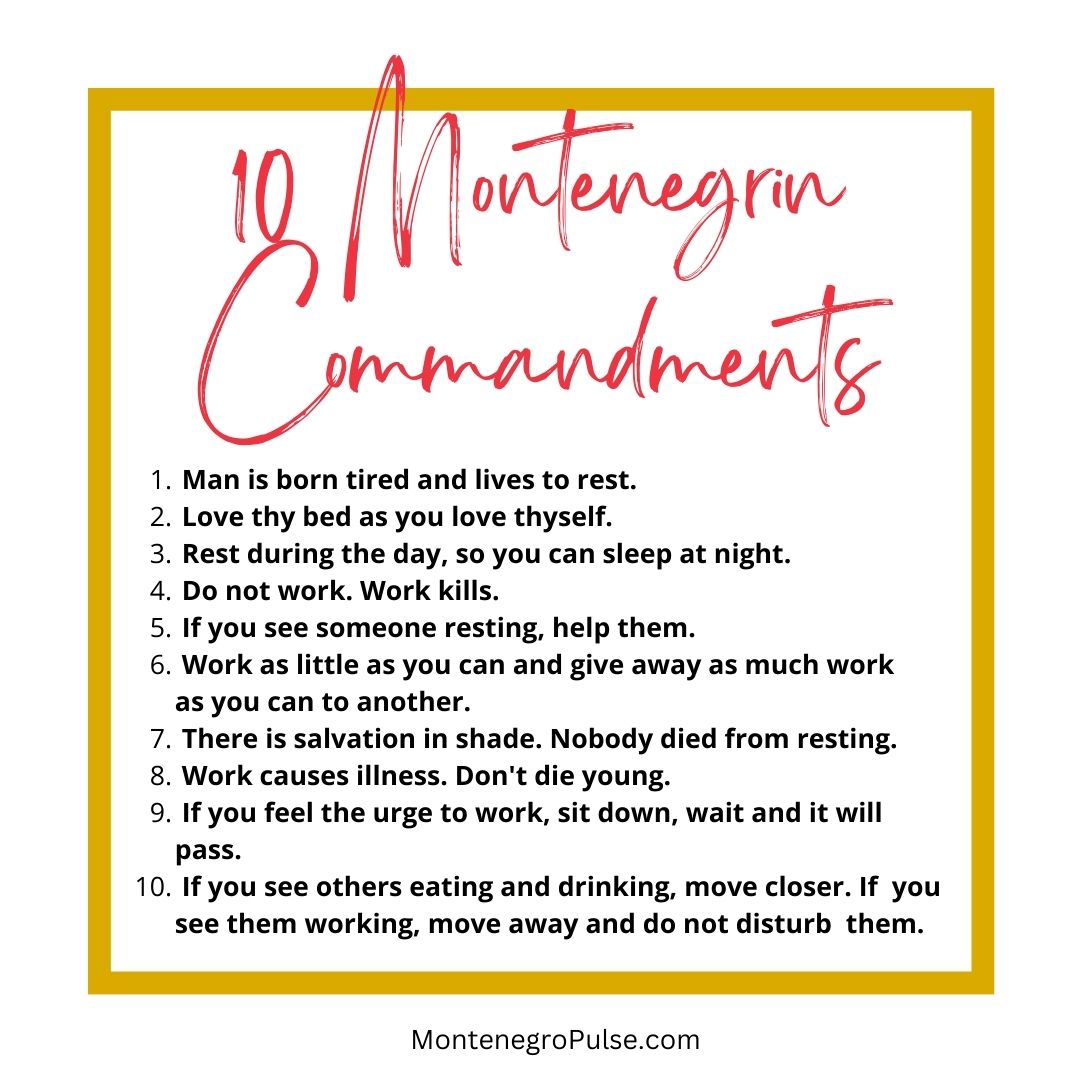 “Why do Montenegrins keep a chair beside the bed?”
“So they’ve got somewhere to rest after getting out of bed in the morning!”

People of the Balkans believe smijeh je lijek (laughter is medicine) and light-hearted jokes about the different republics that made up Yugoslavia are some of the most popular here. While Croatians are depicted as pedantic and Bosnians as unsophisticated, jokes about Montenegrins usually portray them as lazy.

While you might wonder if there’s a kernel of truth in these jokes when you see cafés full of locals sipping coffee in the sun throughout the day, one thing Montenegrins are undoubtedly good at, is making the most of any situation.

And their famous laissez-faire attitude is no exception.

Montenegrins have taken advantage of their reputation by creating the 10 Montenegrin Commandments, a humorous list of rules Montenegrins ostensibly live by. This list is printed on bags, magnets and t-shirts and sold to tourists in souvenir shops throughout the country. Foreigners find this list hilarious and these souvenirs are incredibly popular.

Isn’t it ironic that these so-called ‘lazy’ Montenegrins have been industriously making money from their reputation?

If you’ve never heard of the 10 Montenegrin Commandments, here they are:

Contrary to what the 10 Montenegrin Commandments say, Montenegrins are in fact very hard-working people. They just have a relaxed attitude in general… and they know how to enjoy life!

Because office hours often start between 7am and 8am, many of them start work early in the morning. The advantage of this is they finish around 3-4pm and have the rest of the day to go to the beach, socialise and spend time with their families.

After work Montenegrins meet at home to have lunch together. Lunch is the main meal of the day in Montenegro and it often happens between 3 and 4pm. After lunch, it’s time for a siesta or time on the beach, especially in the height of summer when it’s hot outside. Once the temperature drops in the early evening, it’s time to head out to weed the garden or cook lunch for the following day. Dinner is light and quick, before heading out for an evening stroll at about 8pm.

The Mediterranean climate on the coast of Montenegro also adds to the impression that Montenegrins are slow and lazy. It’s hard to rush when it’s 35°C (95°F) out! Here, people make the most of plentiful sunshine, warm seas and a slower pace of life than in the cities.

As you see, Montenegrins are actually hard-working. Work is a part of life, but socialising and leisure are also priorities. I would say that Montenegrins enjoy that elusive work-life balance that we all strive for. They really seem to have found the sweet spot!

Another way Montenegrins have ingeniously taken advantage of the stereotypical lazy Montenegrin is the annual Lying Down Championship that takes place in ﻿Ethno Village Montenegro﻿ every year.

The competition has been going 12 years so far and 2022’s champion, Žarko Pejanović, won by lying down for 60 hours. Other than 8-hourly bathroom breaks, contestants must stay lying down until only one is left. While 60 hours is an impressive feat, 2021's champion lasted an incredible 117 hours - that's 5 days!

For his win, Žarko took home €350 in cash, lunch for two in a restaurant, a weekend stay at Etno Selo Montenegro and a rafting trip.

An Illustrated History of Slavic Misery by John Bills is a witty book covers a range of well-known (in Slavic countries) personalities, from kings to musicians.

The Full Monte, A Fulbright Scholar’s Humorous and Heart-Warming Experience in Montenegro follows Paul Dishman’s journey of spending a year in Montenegro.

A Guide to the Serbian Mentality was written by Momo Kapor, a Serbian writer and artist from Belgrade. The book gives a humorous insight into Serbian mentality, much of which applies to Montenegrins too.

Jokes About Montenegrins Being Lazy

People from this region are known for their wit and sharp sense of humour. Here are some of the most popular jokes about Montenegrins being lazy.

A Serbian, a Bosnian and a Montenegrin walked into a bar.
They started talking when the bartender interrupted them and asked “if each of you had to choose to be reincarnated as an animal, what would it be?”
The Serbian said “That's easy, a Bear. They are strong and fierce and respected.”
The Bosnian said “I would be a lion, raw power and strength and it’s the king of the jungle!”
The Montenegrin said “I'd be a snake!”
Everybody turned their heads, surprised. “Why?” they asked.
The Montenegrin said “Well, you can lay down and walk at the same time.”

Do you know how do they build motorways in Montenegro? No? They build one kilometre and then just end it with a sign saying ‘etc’!

Two Montenegrins are watching a woman drown.
One says to the other “A woman is drowning and we’re just standing here.”
The other says “You’re right. Let’s sit down.”

American film director Steven Spielberg was shooting a movie in Montenegro and invited locals as extras. He hired two Montenegrins and explained to them that their task is to lie under a tree.
So the two Montenegrins worked for two days. On the third day Spielberg told them that for the new scene they have to move and lie under a different tree.
The older Montenegrin responded “Alas Mr. Spielberg, we are indeed extras and actors, but we are not stuntmen!”

What is the Montenegrin record in 100 meter sprint?
43 metres.