Monty the Cat: From Starving Stray to International Adventurer

Read the story of Monty the cat who was on the verge of death... until he decided to fight off two dogs and climb into a traveller's van. 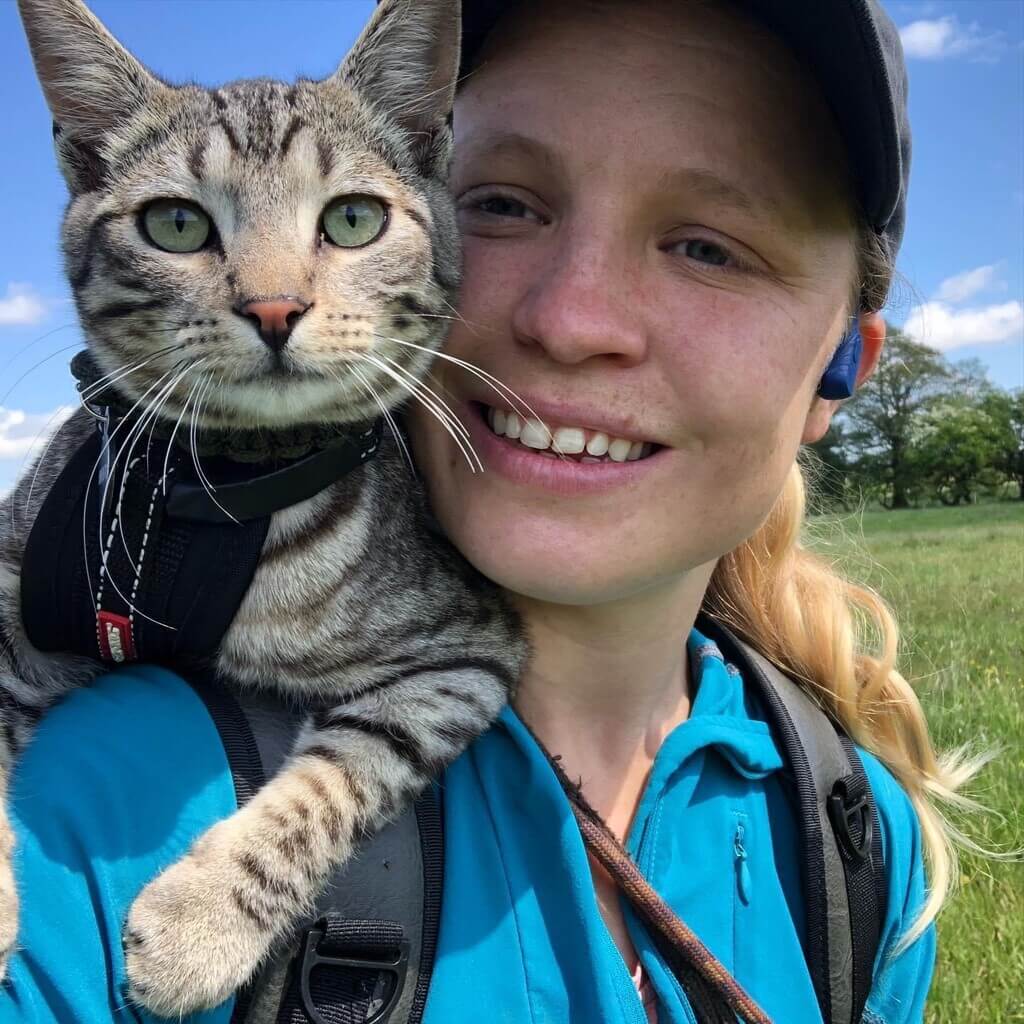 Monty the cat with his owner Rawnie

This is the incredible story of Monty the cat as told by his owner (well, we all know cats don't have owners, they have slaves, but anyway), Rawnie Dewhurst.

Rawnie contacted me asking where she could make a donation to help cats in Montenegro and this moving story came out of our conversation. With her permission I'm publishing Monty's story as told by Rawnie here.

Have you got some tissues handy? You'll need them!

In November 2019 I found myself in Montenegro while traveling Europe in my van. It wasn’t in my plans, but it’s such a beautiful country. A storm came and I booked a ferry to the south of Italy, but the ferry was cancelled due to the storm. I found a safe spot to stay for three days until the ferry was going again.

On the morning of 4th November I opened my van and didn’t notice a little grey ball of fluff climb in. I have terriers and both hate cats, but he stood his ground and started eating their food. For three days he wouldn’t leave; he slept on my bed and stole the dogs’ food. He was full of fleas, had ear mites, an infected eye and was just so small. He also had a circular burn on his ear, which I believe was from a cigarette. I knew I had the ferry booked and legally he wasn’t allowed to be on it, but I was in love, so I smuggled him to Italy by night on the ferry.

I took him straight to the vet where I found out he was 8 weeks and only 400 grams. The vet told me not to get too attached as he wasn’t in great shape, but he ate like a horse so I felt he was a fighter. He grew and became stronger every day… and he had two dog brothers to keep him safe. 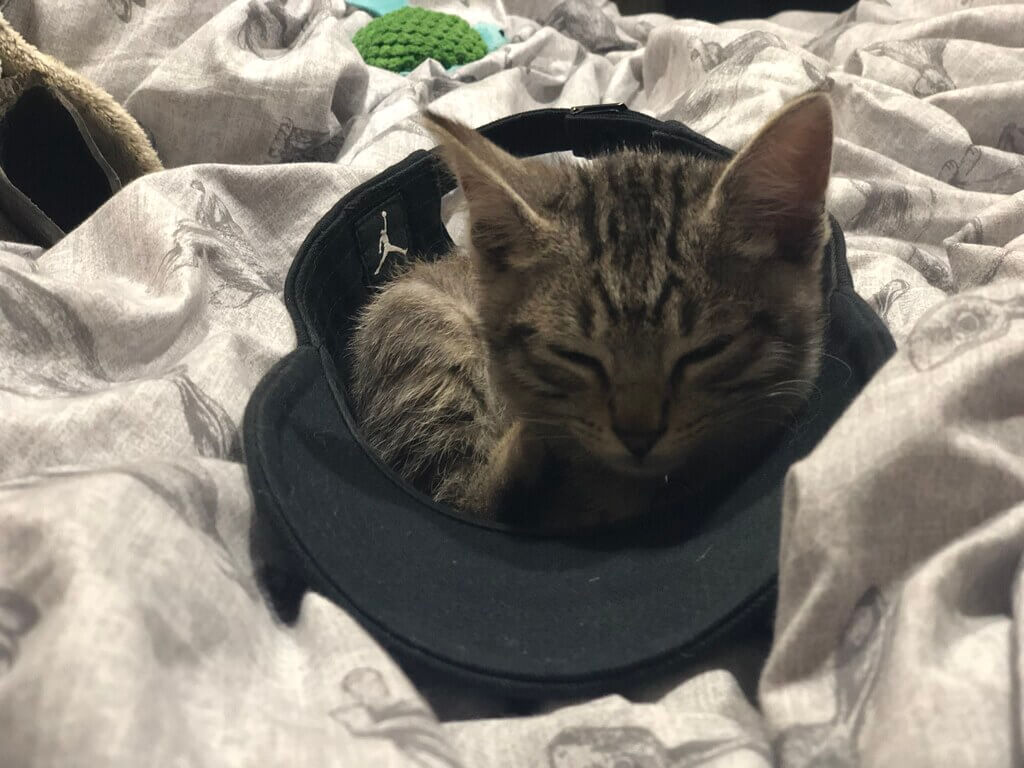 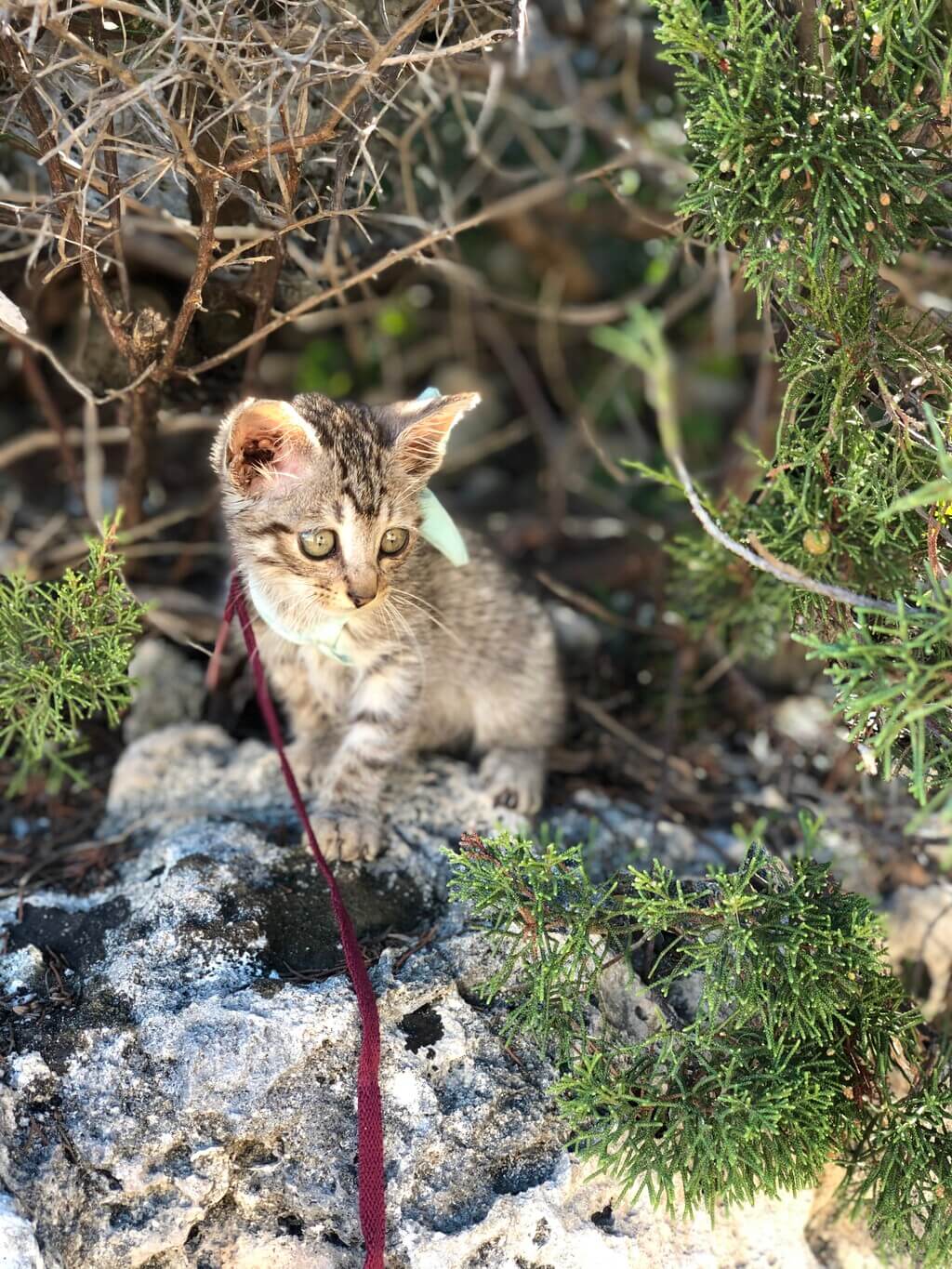 Monty the cat learning to walk on the lead

From a very young age he was off lead. He was wild and needed to have freedom, but I also trained him to be on the lead and he sat proudly on my right shoulder when leashed or unsure.

Monty traveled through Italy, France, Spain, Gibraltar (his first steps on British soil), Portugal, back through Spain and France to England, Wales and Scotland. He climbed mountains, explored woodlands and traveled in the kayak, which he loved. During his life he made many people smile and fall in love with him. He loved van life and didn’t like houses.

At least once a week I stopped somewhere he could be off lead and just be a cat. He was often found stuck in trees and needed rescuing a lot, even if it was just four feet off the ground. He had the nickname ‘crap cat’ because he wasn’t great at cat stuff and often fell off things or couldn’t jump very high. He loved hikes out and was only on lead because of other dogs, not because I thought he wasn’t able to be off lead. 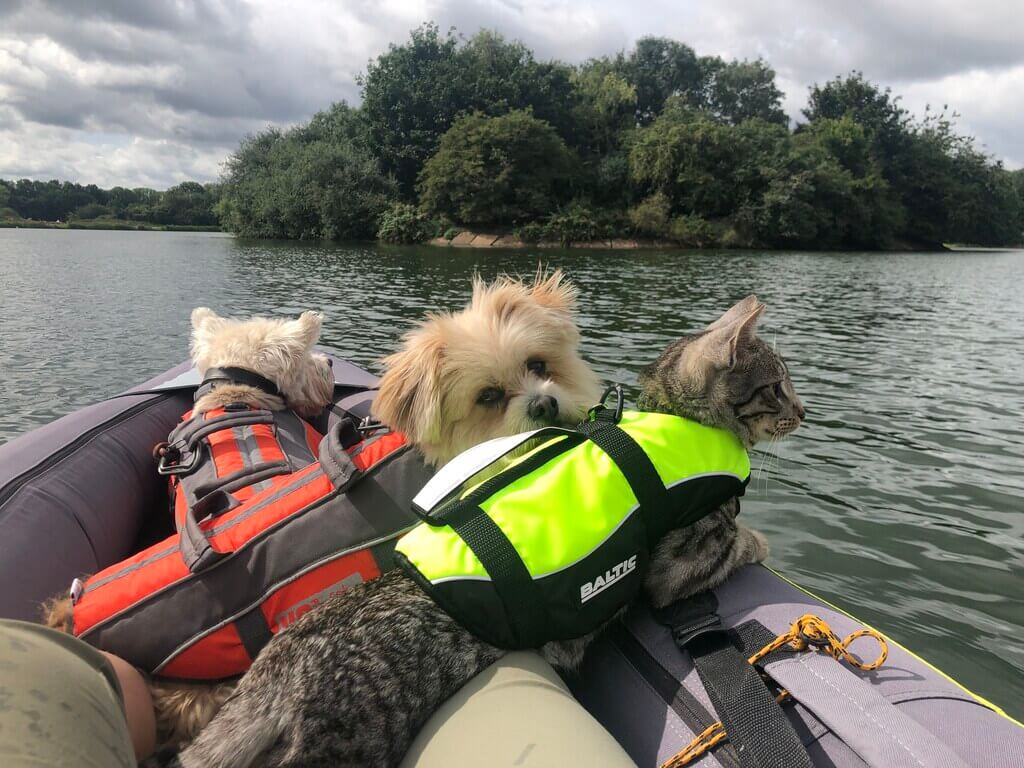 He spent his days playing with his best friend Milo and stealing food. His favourite food was bread, the only time you saw his feral side. He loved exploring ruins and castles, he climbed mountains and struggling people were encouraged after seeing a cat doing it.

He met people from all over the world and just loved life. He was happy, healthy and always had a full belly. He was always small at just 3.2kg, but had the attitude of a lion. He was known to have German Shepherds under his control, but was never nasty, he never bit or scratched. He was such a beautiful soul. 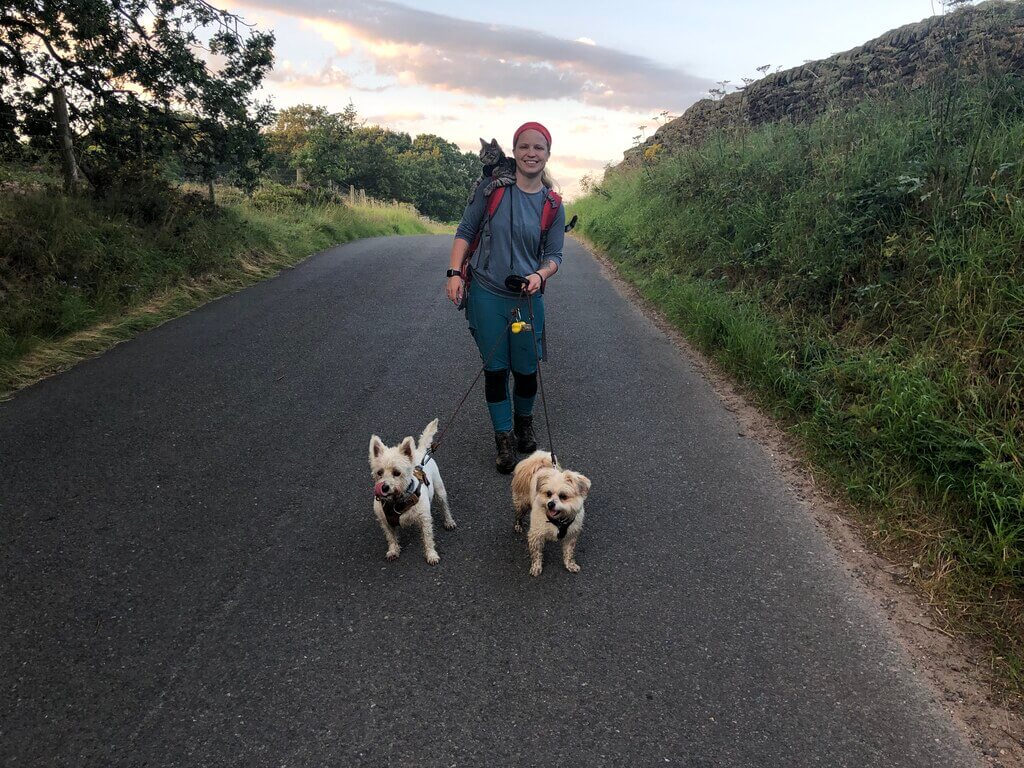 Monty the cat adventuring with his family

Last week, on the 15th October, he was off lead after being in the same spot for two days. Being off lead full time, he climbed trees and got a few mice. The road was over 100m away and he never went near roads, so I thought he was safe. I called him in and normally Monty would come full speed, but no Monty. Luckily he had a tracker on and I went out expecting to get the ladder out for a Monty rescue mission.

Tragically, he had been hit by a car and without the tracker it would have been hard to find him. It was clear he died instantly and that was the only comfort I could take from it. I will never know what took him over there as he was very scared of cars; I can only think it was something fun. I have torn myself apart with guilt but the only thing I could do differently would be to tie him up all the time. But that’s no life for a cat and he was used to being off the lead from the time he was small.

Monty came into my life like a wrecking ball. I have always liked cats, but I was always a dog person. Now am both and dearly miss my catdog. He lived his 9 lives out in 9 countries, met his end in Marais Poitevin National Forest in France, which is where I buried him (I normally cremate my pets but this wasn’t an option due to covid and not being able to be there). I had no spade so dug with my hands a beautiful resting place where he has mice to catch, trees to climb and other campervans come so he will have company. This is a protected part of land so he will never be disturbed. He joined in my travels and was sadly left on my travels, leaving a hole in my heart.

Monty gave me a new outlook on life:

I hope I’ve explained his story well. I couldn’t believe how many he touched across the world. People I’ve never met have been lighting candles for him in the U.S.A, Australia and in countries I’ve never heard of. They have been sending love and letting me know he made them smile during a time when it was hard to find something to smile about in the world.

It probably shows I loved him very much and tried to protect him at all times. But I have to accept he had his own mind and I couldn’t tie him up his whole life; he needed cat time. He was only on the lead when we were near a road, there were dogs off lead or other campers were about because he had a bad habit of walking in and stealing food! Once, he attacked and beat up a French cat three times his size, much to his owner’s disgrace. 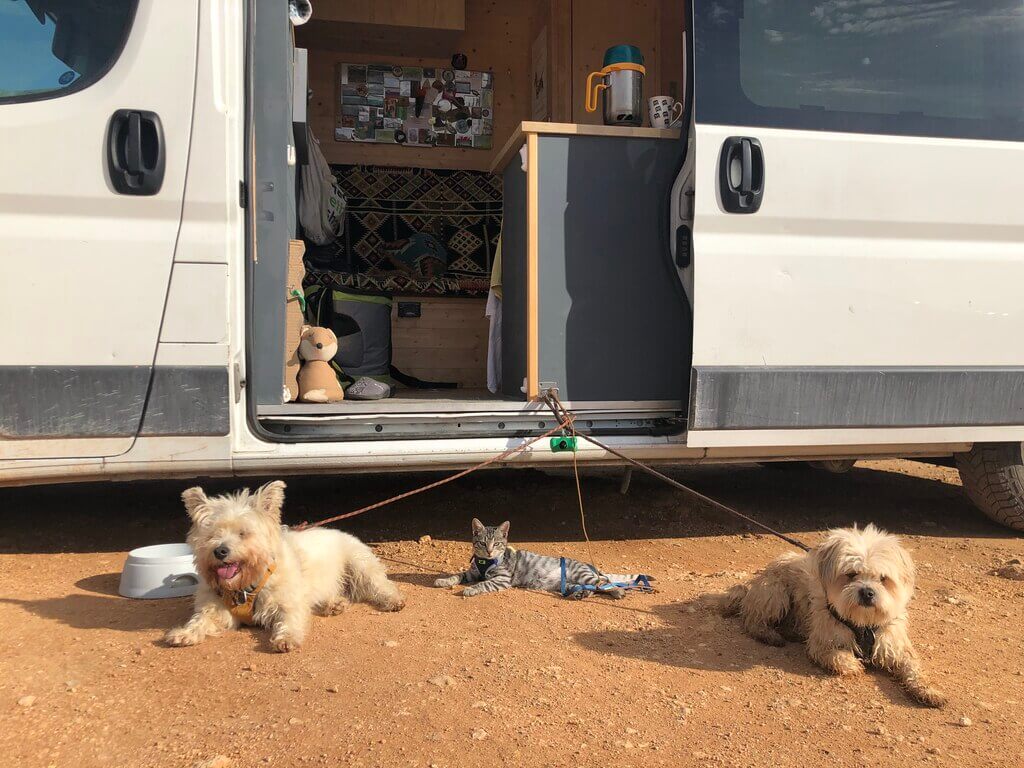 I hope a donation will help other cats from Montenegro experience love, and give them the chance to grow strong and get homes and the care they deserve. In my opinion the best cats come from Montenegro and without help many won’t get the chance at life my Montenegro got. He lived a life many humans could only dream of, I just wish it was many years and not just one.

I think many people I know would like to donate for him as well and it would be amazing if in his short life he helped people and cats from all over the world. While many cats don’t even leave their houses, he saw the world and made an impact.  As much as it has broken my heart, I am happy our paths crossed and he had a good ride. I’ve always believed in quality over quantity in life and still would have taken him, even if I knew I only had one year as it was an amazing journey with him. 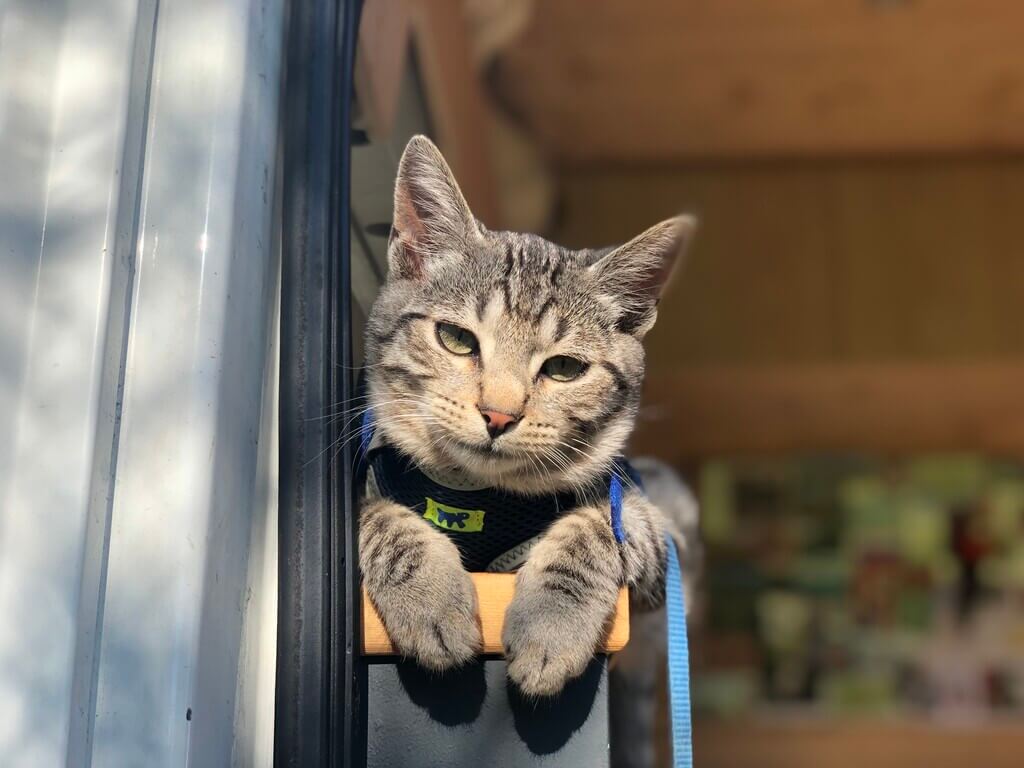 Monty the cat enjoying his life of adventure

Rest in peace Monty. Thank you, Rawnie, for sharing your story with us. I’m sure I’m not the only one who was crying by the end of it! I loved that Monty turned someone from a ‘dog person’ into a ‘cat and dog person’, and the life lessons Monty taught Rawnie are some we can all learn from.

If you would like to make a difference in the lives of cats in Montenegro, please consider making a donation to Kotor Kitties, as Rawnie has. Kotor Kitties run Montenegro’s only official TNR (trap-neuter-release) programme, which helps reduce the number of unwanted kittens and give stray cats a better quality of life.