How to see and what to expect at Risan Mosaics, the painstakingly reconstructed foundations of the villa of a noble family in the Bay of Kotor, Montenegro. 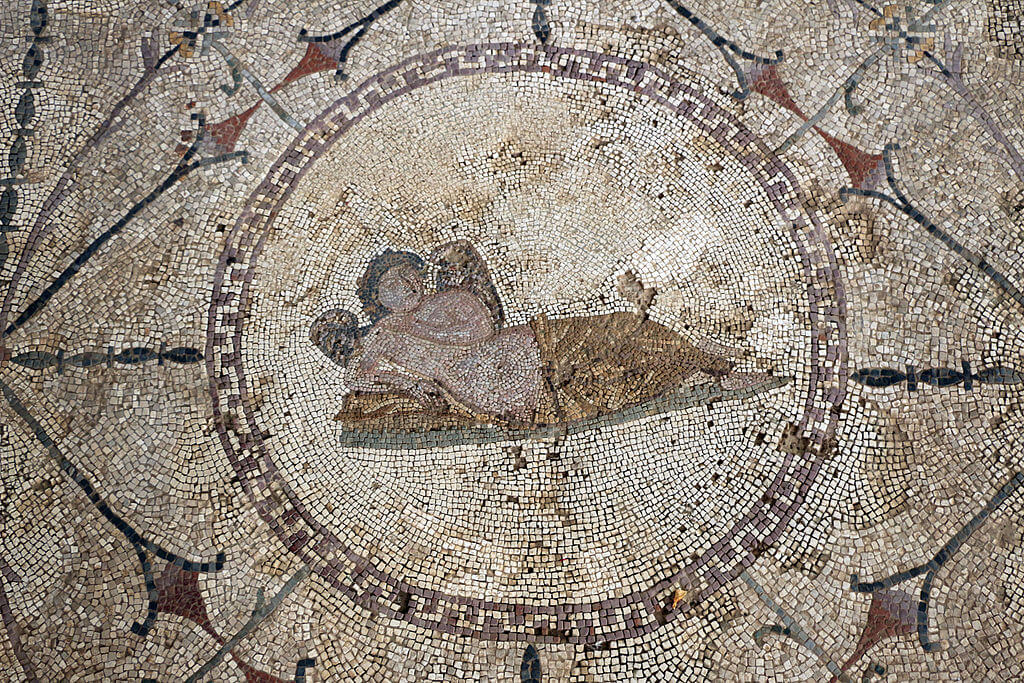 Mosaic of Hypnos, God of Sleep, in the Roman mosaics of Risan. Image: Sailko CC by 3.0

In today’s Bay of Kotor, the towns of Kotor and Perast, command the attention of most visitors.

In the other ‘wing’ of Kotor Bay’s butterfly-shaped bay, unassuming Risan hardly gets a glance as derelict Yugoslav-era buildings overshadow the traditional stone buildings in the village.

But hiding behind the utilitarian architecture are the remnants of the powerful empires that once ruled Europe.

In fact, Risan is the oldest settlement in the Bay of Kotor and was once the seat of Illyrian Queen Teuta. When the Roman Empire conquered the Illyrian queen it became a Roman port town and archaeologists have been working here since at least the 1820s uncovering the remnants of the people who lived in Risan .

One of the best finds is Villa Urbana, sometimes also called Villa Romana, whose foundations survived the centuries remarkably well. There are also remains of Illyrian settlements and the original fort that the first settlers in the Bay of Kotor built.

Here’s how you can visit Risan Mosaics, what to expect and where to find more ancient ruins in Risan.

The Roman mosaics in Risan are the remnants of Villa Urbana, the house of a noble family from the 2nd century A.D.

As you walk into Villa Urbana, you’ll walk onto a walkway that surrounds a central atrium. Roman houses had open air atriums in the middle and the rooms of the house were spread around this atrium. In the atrium there was an impluvium, a pool that collected the rain that could be used in the house. There was also a compluvium which directed the water to the kitchen and bathroom. Roman houses were relatively advanced for their time. They had basic plumbing and by the beginning of the 4th century they even had underfloor heating. Many buildings in Kotor old town, which was also founded during the Roman Empire, also follow this layout.

As you walk around the walkway, you’ll see the restored mosaics and remnants of the walls between the rooms. There are seven rooms with mosaics, but two haven’t been restored and put on display yet. The mosaics were made with white, grey-blue and black tiles. Only the white stone could be sourced locally, meaning the grey-blue and black stone was imported.

There are also servants’ quarters, which had a dirt floor, and a backyard. In the backyard, you’ll see a display of stone pillars and other remnants of the villa and from Carine, an Illyrian site nearby (see the section about Illyrian ruins below for more about this.) In all, the villa covers around 790m2. 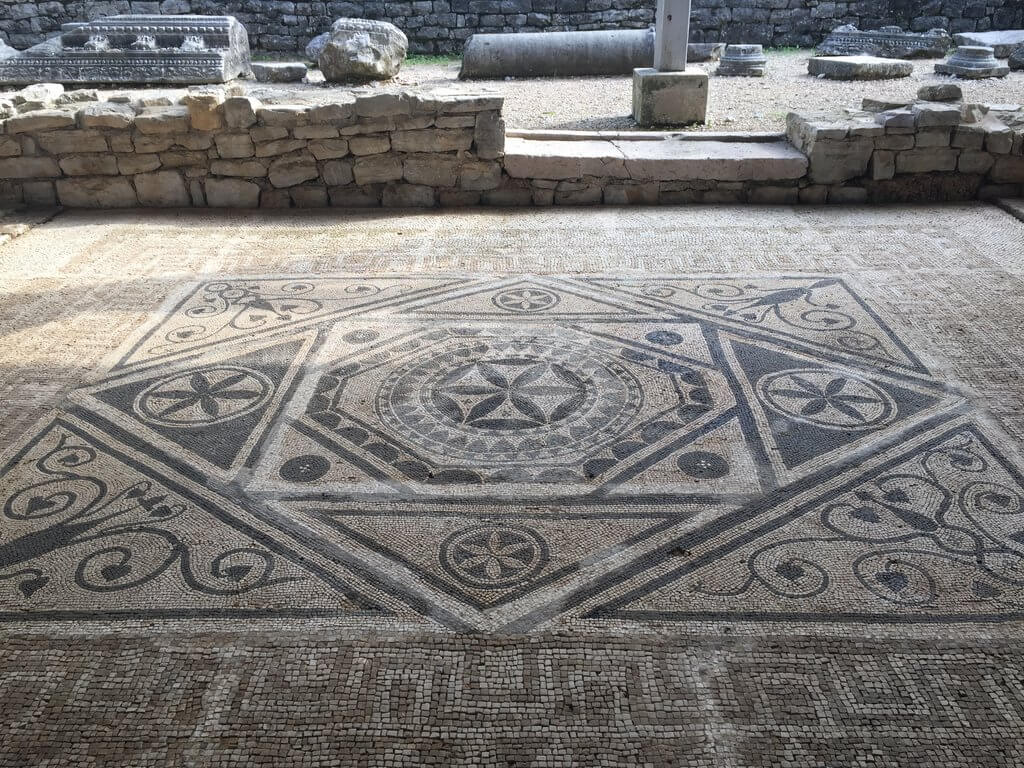 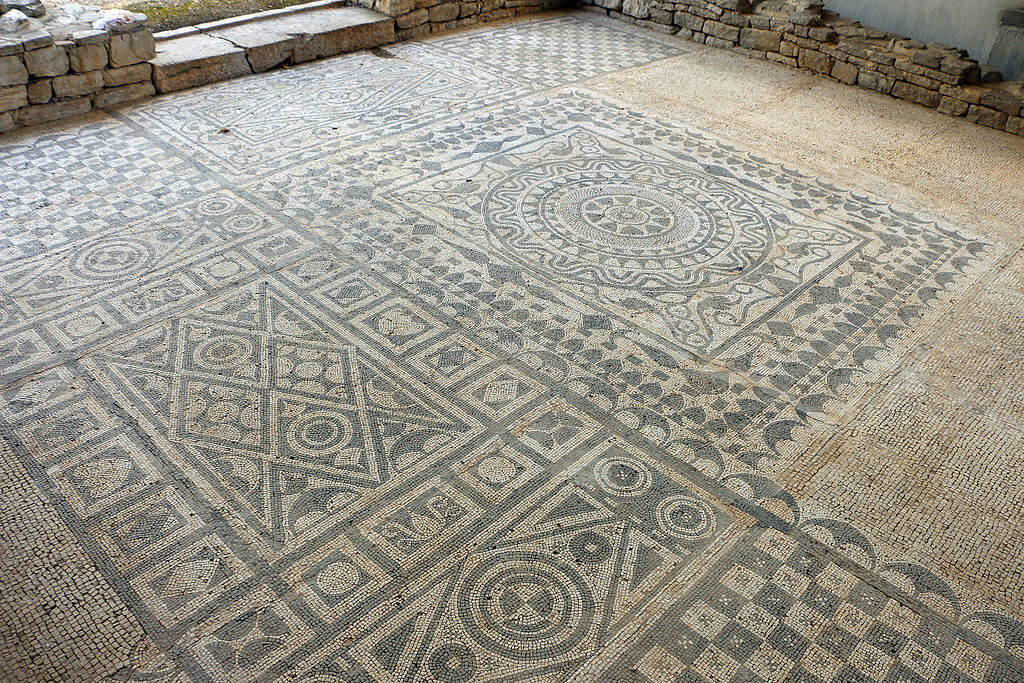 The pictures shown by the mosaics, added to what’s already known about Roman life and architecture, have helped archaeologists determine what purpose each room served.

The war meeting room double-headed axe (labrys) and a rosetta, the Roman symbol of power. The reception room’s mosaic showed stylised octopuses, plants and another labrys. In the middle there’s a sun, the symbol of the Roman Empire. The mosaic in the dining room is of squid and wine. And another room has a chequerboard pattern.

But the stand out art work that makes Risan mosaics so valuable is the one in the master bedroom. This mosaic is of a winged Hypnos, the Greek god of sleep, reclining on pillows. It’s the only one in the villa that uses more than three colours and it’s the only known mosaic of Hypnos in the world.

Hypnos was the protector of Risan and the mosaic was to protect the owner of the house while he slept.

Mosaic of Hypnos, God of Sleep, in the Roman mosaics of Risan. Image: Sailko CC by 3.0

Near the mosaic of Hypnos there’s a mysterious rectangle structure that has confused archaeologists. Since it’s dug into the ground, the most likely explanation is that it was used for keeping food cool, but since human remains were found in it, it’s also possible that it was a grave.

Your ticket to Risan Mosaics includes a leaflet that tells you about the mosaics and the site. But you’ll also find a very good display along one of the walls with lots of information about the history of the area and culture of the Roman Empire.

Some visitors have commented that the Risan Mosaics don’t compare to Roman mosaics elsewhere, like in Pompeii in Italy. While that’s undoubtedly true, if you’re in Montenegro the Risan Mosaics are a really accessible way to view this Roman art. Despite the smaller scale it’s no less impressive to think of the sheer age of these works of art and how long ago people lived in this house. Not to mention this attraction is rarely very busy and you won’t have to wait in any queues to get in.

In July 2019 the first Roman Night was held in Risan’s central square. Locals dressed up in togas, there was music, gladiator school for kids and fire dancers. If you’re interested, you can check on Facebook events to see if Roman Night will be on again when you’re visiting.

Getting to Risan Mosaics

You can drive directly to Risan Mosaics if you have a rental car. There’s limited free parking in front of the complex and if you don’t find a space there, there’s more free street parking nearby. Just be wary of going further up the street the mosaics are on, you’re unlikely to find more parking up there and it can be tricky to turn around. 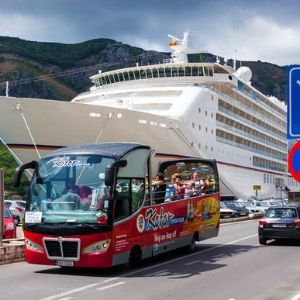 You can visit Risan Mosaics on Kotor’s hop-on hop-off bus tour, Kotor Open Tour. The tour includes entrance to the mosaics and stops here for 30-40 minutes before turning around and heading back to Perast.

You can catch any bus that stops in Risan. From the bus stop it’s a five minute walk to the mosaics site and it’s signposted on the main road. There’s a regular Blue Line bus around the bay that runs between Herceg Novi and Kotor. There are also more intercity buses that can take you there. The best places to find timetables are at the bus stations, on the Balkan Viator website or app and on Busticket4.me.

Discovery and Preservation of Risan Mosaics

The mosaics of Risan were first written about by Viala de Sommier, a French soldier, in 1820. Villa Urbana was later uncovered and damaged when a new road was built through the site.

In 1930, Dušan Vuksan, the director of the national museum in Cetinje started excavation work. Unfortunately work had to be stopped and it wasn’t until almost a hundred and forty years after they were discovered, in 1957, that excavation work finally started.

It took until the 1970s to excavate the site and reconstruct the foundations of the villa. In 2004 an expedition from Warsaw uncovered two more mosaics and the site remains a work in progress. It’s been a protected monument of ancient history since 1960.

Teuta and the Roman Empire

Queen Teuta, ruler of the Illyrian tribes, took refuge in Risan after she was pushed back from Skoder (in Albania) by the Romans in 228 B.C. Reportedly, they’d had enough of her pirating their ships and decided to cross the Adriatic for the first time to put an end to it.

The official story is she signed a treaty and even sent an envoy to Rome to apologise for her husband’s actions (but not her own). But local legend says she killed herself by jumping from Mount Orjen once she realised she would lose the war.

It seems to me a woman strong and cunning enough to take power after her husband’s death, take on the Roman Empire, get away with pointedly not apologising and keeping a portion of her territory isn’t the type to throw herself off a mountain… but that’s just my opinion!

Another local legend says that there is a whole sunken city in the waters of Risan Bay. This one seems to be true since there are plans for underwater excavation work in future. There are also sunken ships off the shore of Risan and they likely contain many more valuable artefacts.

There are two Illyrian ruins that you can visit relatively easily. The first is Carine, which lies on the banks of the river in Risan. Archaeologists have found remnants of Hellenist (323 – 31 B.C.) pottery, gold coins, marble tiles, amphorae etc. Some artefacts found at this site are on display at the Roman mosaics. Carine is an open-air, but fenced off site, so you can only see it from the other side of the fence. There's no entrance fee.

The second site is the original Illyrian fort in Risan, called Gradina. You can hike up to the ruins of the fort and explore them; they’re not fenced off. You’ll also get some stunning views of the bay from up here!

Our Lady of the Rocks Island Church